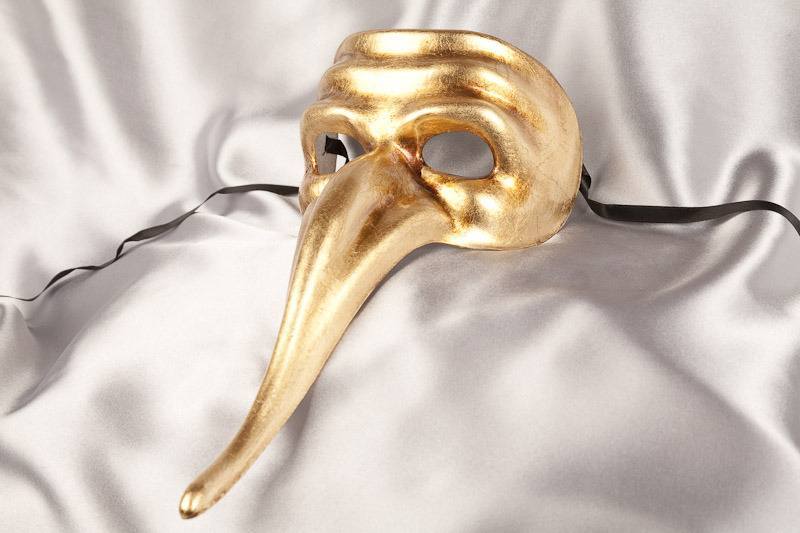 Scaramuccia (better known as Scaramouche) is yet another unscrupulous rascal in the cast of larger-then-life characters that make up the Commedia dell’arte. A stock clown-type character who combines characteristics of the Zanni (servant) and the Capitano (a braggart soldier), Scaramouche was received with great enthusiasm and genuine appreciation all around Europe, and particularly in France and England. While coming across as a humorous, roguish adventurer – believed by some to represent a Spanish don – he is in fact, cowardly and obsequious, prepared to obey or serve a master who is of low social status. Scaramouche’s stage persona is essentially that of the unscrupulous and unreliable servant, played with a mixture of drama, farce and lively burlesque.

APPEARANCE AND THE MASK
Scaramouche customarily dresses in black, sporting an outlandish ensemble that consists of breeches, a heavy tabarro (archaic cloak), a matching tunic with a white ruff or clown collar, and a soft floppy beret that hangs down over his neck.

Until the mid-1600s, Scaramouche wore a mask distinguished by a thin, pointed and disproportionately extended nose. Constructed from black velvet and covering only the upper half of the actor’s face, this mask emphasised the character’s typically vainglorious yet cowardly personality. The mask was discarded by Tiberio Fiorillo who favoured a white powdered face to convey facial expression and exaggerated gestures to convey emotion and intention. In this guise Scaramouche flaunted large eyes, distinctive dark eyebrows, and a Van Dyke beard (a style of goatee popular in Europe in the 17th century).

ORIGIN AND HISTORY
Following a pattern of other characters of Commedia dell’arte that began as stock masks but later developed into more well-rounded characters, Scaramuccia emerged in the 17th century as a substitute for the Capitano whose popularity had begun to wane. Tiberio Fiorillo (1608–94), an Italian actor of Commedia dell’arte and the director of the troupe of the Comédie-Italienne, although not the first to play the role of Scaramouche, greatly developed the variation of the original character that became popular in France while entertaining the court of Louis XIII.

Instead of portraying the Spanish braggart soldier, boasting of exploits abroad, he transformed the role from that of a military man to that of a comic servant, usually an indigent gentleman’s valet. Fiorillo adapted the Captain’s character to suit French taste and did so with considerable subtlety and finesse, abandoning the traditional mask and using mime, grimaces and tomfoolery to intensify the audience’s amusement. In the 1670s, he portrayed Scaramouche in London with equally great success, receiving thunderous applause for his agility and acrobatics. Scaramouche thereafter became a significant presence within the cast of characters of the Commedia dell’arte.

English actor Joseph Grimaldi, and his son J. S. Grimaldi, also made numerous appearances as Scaramouche in the 19th century. Grimaldi senior popularised the role of Clown in the harlequinade (the part of a pantomime in which the harlequin and clown play the principal parts) in the early 1800s, and is credited with inventing the enduring concept of the white-face clown.

CHARACTER AND PERSONALITY
As a result of Fiorillo’s revised interpretation, Scaramouche is somewhat less conceited than his predecessors even though he is in reality more adroit and cleverer than Capitano. While he is still cowardly and portrayed as a ridiculous buffoon he is, in fact, extremely talented, artistic and graceful. He has a good voice and can play a lute.

On stage, he is often beaten repeatedly by Harlequin for his boasting and cowardice. Throughout Commedia dell’arte performances, Scaramouche remains a great friend of Pulcinella, the dual-natured servant/master, the ultimate self-preservationist and social chameleon.

HIS ACTIONS
Scaramouche’s audience entertained value relied on many subtle and expertly choreographed visual gags. The role was very physical and he would, for example, slap his face with his foot. One famous sequence had the actor wrapped in a cloak and squatting at the back of the stage, so he looked very small. As he slowly walked toward the front of the stage, small step by small step, he would gradually rise to his full height. With the cloak covering his body and legs, so the audience could only see his face and hat, the illusion was created that he was coming toward them from a great distance when in fact he had only walked from one side of the stage to the other.

Scaramouche was portrayed as a man of energetic actions, moving his heads and hands constantly to illustrate what he is saying, sometimes pretending to mime in exotic languages such as Turkish and Chinese. The character is recognised for his ability to transmit emotions to the audience, utilising a range of forms of expression including pitched laughter as well as physical gestures.

SCARAMOUCHE IN THEATRE
Scaramouche eventually became incorporated as an iconic character in ‘Punch and Judy’ (puppet shows derived from Commedia dell’arte that comprise a sequence of short slapstick scenes), where he is the owner of ‘Toby the Dog’, another stock character. Scaramouche is frequently slapped by Punch, causing his head to come off his shoulders. This has resulted in Scaramouche becoming associated with a class of puppets with extendable necks.

SCARAMOUCHE IN POPULAR CULTURE
Scaramouche frequently appears and is referenced in popular culture. Historical novels, plays, film adaptations and TV series invariably portray him as a swashbuckling character. However, his most well-known representation may be an appearance in the ever-popular song “Bohemian Rhapsody”, written by Freddie Mercury of the British rock band Queen for their 1975 album ‘A Night at the Opera’. The lyrics include a catchy line asking Scaramouche if he would like to perform the dance known as a fandango. Scaramouche is also the name of the lead female role in the jukebox musical play ‘We Will Rock You’, which is based around Queen’s music.

Finally, the appointment of Anthony Scaramucci – a.k.a. ‘the Mooch’, an American financier and entrepreneur – as the White House communications director in July 2017, prompted an 8,185% increase in online searches for Scaramouche, according to Merriam-Webster.